Children’s Book of the Week: A Tale Dark and Grimm 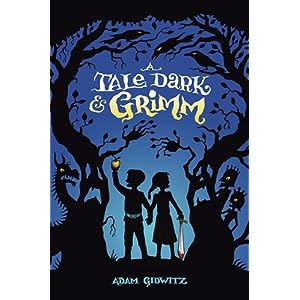 A Tale Dark and Grimm by Adam Gidwitz

I have now seen three reviews of this book that mentioned turning the last page, flipping the book over, and starting it again. I pretty much dismissed all that, but got it because the concept — a retelling of classic Grimm brother stories that weaves Hansel and Gretel into each one — sounded intriguing. Henry started reading it first, and it was one of those books that he just carried all over the house and read in corners and under tables and didn’t do anything else until he was done. Then I picked it up, and while it didn’t grab me wholesale quite the way it did Henry (or, well, maybe it’s more that I have to drive the car and make the dinner and don’t have a 7-year-old’s luxury of having my day’s agenda be: Read Book), I plowed through. But! While I was plowing through, Henry kept stealing it back. And then I finished it, and if I saw it lying on the couch, later, I couldn’t help picking it up to reread some of the juicy parts.

And it is pretty juicy. If by juicy you mean “with blood spurting everywhere.” It’s not gratuitous, and those Grimm brothers do tell a gory story, so it really just plays off that, but there is a lot of gruesome stuff in here. But it’s not scary. Not heart-pounding, I mean. It’s more alarming, and “oh no!” and, mostly, “what’s next?” I will say that you’ve got to know your kid on this one, and it totally wouldn’t work as a bedtime chapter book. But the whole thing was so exciting, and so deliciously grotesque, and it all wraps up in such a satisfying manner, that you really do have to go back and reread. A lot of the Grimm stories were unknown to me, but I love the way Gidwitz ties them all together, and the part where Hansel goes to Hell and fools the devil’s mother is worth the price of admission right there.