Children’s Book of the Week: Gnomes 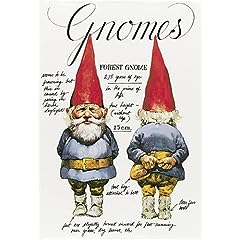 When I was 7 years old or so, family friends of ours somehow acquired a copy of Gnomes. I honestly think I spent a good year looking at that book, ignoring everything around me, whenever we visited them. Recently it suddenly occurred to that Henry would love this too, but I was sure it would be long out of print. Not only is it still in print, but it’s been reissued. Hurrah!

I can’t even describe how completely magical this book is. It’s a coffee table book, and has a lot of pages, so not one to read in one sitting, or even to read all the way through at all. The way it’s written is like it’s a lushly illustrated research manual, ostensibly by some gnome hounds who studied the gnomes of the world and are presenting here all the information they have gathered. The full-color paintings are divine, and the level of detail is incredible. It really does make you believe that gnomes must be out there, and of course they don’t wear red caps until they get married, and live to be 500, and keep mice as pets. There are also gnome stories, and a Song of the Troll*. There’s also a topless female gnome, so be warned if that sort of thing might bug you (my own kids have seen me without clothes so many times I don’t think they even noticed the topless gnome).

*Eli has a cold, which is why he sounds like a craggy troll.