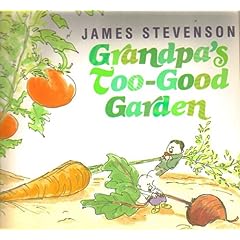 I remember the first time I read this book to Henry. He was maybe two-and-a-half, and we were sitting on the couch, and I was reading this book but also maybe thinking about something else a little bit. Suddenly, Henry burst out laughing. I kept reading, and he kept laughing. A few pages later he was gasping and his eyes were watering.

This is one of many “Grandpa” books from James Stevenson, and they’re all great. The main idea is that Grandpa tells his grandchildren, Louie and Mary Ann, about some adventure he had with his brother when they were growing up. The books are in comic book form (sort of), and the midadventures and tall tale bits are hilarious. (Though most hilarious of all to me is the fact that Grandpa and his brother Wainey had big bushy moustaches when they were kids, just like they do as adults.)

In this book, Grandpa and Wainey try to start a garden, and then their father throws his hair tonic out the window, where it spills on the garden, and makes all of the vegetables grow to be bigger than the house. I don’t think I can properly convey what’s so funny about this book. You’ll just have to get it yourself. Wainey hits Grandpa with a rock, Grandpa gets whacked with a rake, and Wainey cuts the hose in two with a hoe. But somehow it’s not violent. It’s got more of a vaudeville thing going on.

We recently got this out from the library again, and Eli discovered it for the first time, and it just gets funnier every time. I’d really recommend anything by James Stevenson — we’ve never been disappointed — but I think this is my absolute favorite.

(I generally don’t like to recommend books that are no longer in print, but I bet your local library has a copy, and I see that they are fairly abundant as used copies, so it’s not like recommending one like The Wuggie Norple Story that you can only buy used for $45 or something.)