Children’s Book of the Week: Here Comes the Garbage Barge! 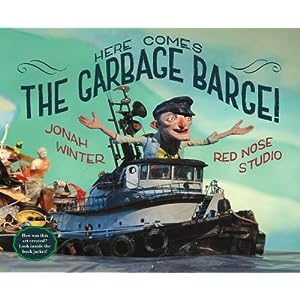 This is my Earth Day book pick. I wasn’t sure about it at first, but it has really grown on me (it’s one of those books that has been helped rather than hurt by the fact that Eli wants it read to him every 20 minutes). It tells the true (albeit heartily embellished) story of over 3 tons of garbage from Islip, NY, that, in 1987, had no where to go. So some businessmen decided to toss it all on a garbage barge and tow it to North Carolina. Where it was rejected. And then it was towed all over the coast, all the way down to Belize, where it was turned back at every port, until it was finally towed back to New York, where it tooled around the harbor for the summer, until Islip was forced to take it back.

A huge part of this book’s appeal is in the illustrations, which are elaborate hand-built sets made of clay, fabric, and, well, various garbagey bits. But the kids also definitely get the point. They like the humor in the story, but they understand that there’s a reason not to just throw things out, because you’re just contributing to garbage-barge-incident kinds of problems. I appreciate that this gets an earth-friendly theme across without being all sanctimonious and obvious about it. Mostly it’s a fun story with great pictures, and then, at the end, you do think about where all that stuff you throw in the bin under the kitchen sink goes.