Children’s Book of the Week: Petit, the Monster 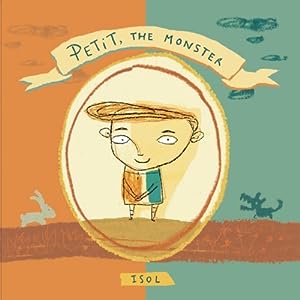 Petit, the Monster by Isol

This is a very simple book based on what has probably been an issue since cave people were trying to figure out what makes children such nutty little beings: sometimes kids are angels, and sometimes they are not. They are, sometimes, as you can guess from the title, monsters. This is a theme we’ve explored before, in books like Edwardo, The Horriblest Boy in the Whole Wide World and Jeremy Draws a Monster and even, to a certain extent, Jumpy Jack and Googily. Apparently we need to keep being reminded that Kids Can Be Monsters, and That’s Ok.

We’re introduced to Petit and all his conundrums (“Petit can be very nice to Grandfather Paco/and very mean to pigeons”). And then his mother brings this duality to his attention (“How can such a  good boy sometimes do such bad things?”). Petit chews on this dilemma for a bit, thinking about what he does well, and what he doesn’t do well, and other children who are not so nice, and how sometimes he likes them, even if they’re mean. He finally says to his mom, “I must be some kind of good-bad boy, maybe. There’s no other explanation.” Which yes, of course, it’s true, and so good for Petit to verbalize it, and especially good for the surely good-bad kid(s) sitting in my lap to hear. And then it ends hilariously: “‘Mother is good because she understands, and bad when she sends me to bed without dessert. Could it be that it runs in the family?”‘

I’m going to ignore the fact that Eli’s most pressing question was, “Why is his name Petit?” and assume that they were all reassured to read yet another tale of a boy who had difficulty being good all the time.