Children's Books of the Week: Barnum Brown and Waterhouse Hawkins 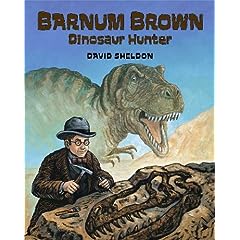 For those of you who have dinosaur-obsessed children (you know who you are), it can become extremely tedious to read every entry in a dinosaur encyclopedia. It can also become tedious to read about how arceopteryx clawed apart a lizard until it was dead and bloody. And with that I say: Welcome, Barnum Brown! Hello there, Waterhouse Hawkins!

Barnum Brown: Dinosaur Hunter is a picture book biography that tells the true story of Barnum Brown, a paleontologist in the early 1900s who made it his personal quest to outfit the Natural History Museum in New York City with as many dinosaurs as he could find. Apparently there was quite a lot of good-natured competition among paleontologists at the time, and that makes up for some of the excitement in the plot.

And there we go: plot. Story. FINALLY. This dinosaur book has everything to please the dinosaur-loving kid: dinosaurs (of course), bits on paleontology, fossils, and skeletons. And, for those dinosaur-weary parents, it has a story and lovely illustrations.

Lovely illustrations bring us to this week’s second book: The Dinosaurs of Waterhouse Hawkins. Also a picture book biography, this tells the story of Londoner Waterhouse Hawkins, an artist and sculptor who loved science, and was commissioned to make life-size dinosaur replicas for a Queen Victoria and Prince Albert science museum. The illustrations in this book are detailed and wonderful, and Hawkins’s passion for dinosaurs translates perfectly for dinopassionate kids. Henry was mightily intrigued by the prospect of building dinosaur replicas, and has already drawn up a plan for the dinosaur park he’s going to build in the backyard. Hawkins also ends up suffering at the corrupt hands of Boss Tweed, so that makes for some lively discussion of bad power-hungry politicians.

I will say, though, that Waterhouse Hawkins is quite a bit longer than Barnum Brown and therefore does stand to become tedious upon subsequent readings, just because you have to carve out a good chunk of time to read it all at once. Though I’ve only read it twice, and I liked it both times, and it’s possible that, like One Morning in Maine, it’s one that the kids like to study the pictures in on their own, and don’t actually want read all that often, so that when they do, you don’t mind (though I know that considering the perseverance of some dinosaur lovers, that’s taking a gamble). I would certainly recommend getting it out of the library, though.

What’s really nice about these books is that they give children a taste of a dinosaur story (with great pictures, no less) that is true and also familiar. These aren’t prehistoric tales of giant beasties and enormous ferns. These are stories of people who look like us, and who want to know more about dinosaurs, which is certainly a scenario any young dinosaur lover can relate to. And, most importantly, it gives you a break from One Million Facts About Each and Every Dinosaur or whatever those other hateful books are called.