I find, when parenting, that a lot of kerfuffle can be avoided if you foist limits and rule setting onto someone or something else entirely. I especially like to foist the responsibility onto battery-operated gadgets. Then I can say, “Don’t blame me! The clock says it’s time to go!” Here are some things that work for us.

Ok, first up: the Teach Me Time Talking Alarm Clock and Night Light. This thing has all sorts of functions that I frankly don’t care about. Here’s what it does for us that’s worth every penny of its $40 price tag: you can set it to change color when it’s time to get up. Simple. Life changing, for us. Before this clock, Henry would get up whenever he woke up. Sometimes he would wake up at 4:00, and, especially if he knew there were new library books downstairs, he would get up and read. Often this would wake Eli, who has one volume: 11. This would wake Zuzu, who would then start crying because she was tired, who would wake Ramona. Plus then everyone would melt down before dinner because they were so sleep deprived.

So! Now, thanks to this clock, nobody comes downstairs until 6:25. You can actually set it to change color twice. I have it set to light up yellow at 6:00 and change to green at 6:25. If they’re awake, they know that when the clock turns yellow, that they’ll be able to come downstairs soon. And they know they can’t get out of bed until the clock turns green.

The other thing I really like about it is that it’s a silent type of alarm, which is especially important in a situation like ours where three siblings share a bedroom. If someone (usually Zuzu) is still zonked out, that kid isn’t going to wake up by a clock changing color.

Oh, and the other other thing I really like is that it has an analog (well, a digital analog) face. Because I’m old school that way. 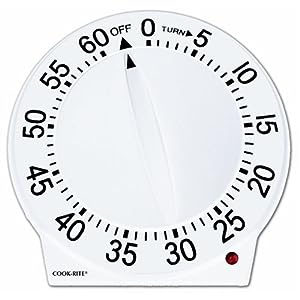 At some point I realized that we needed some kind of timer, so I got this Cook-Rite one ($12). I was super disappointed when it came to find that it wasn’t the tick-tick-tick-tick-DING! one that I thought it would be and instead took batteries. Huh? Why change a classic?

Here’s what it does: it counts down, and then, a minute-and-a-half before it’s going to go off, it starts beeping, and the beeping gets more and more frantic, until it stops, which means your time is up. Yes, it’s annoying. And I will tell you that Dave haaaaaaates it. But! There is a huge advantage to having a “warning” bell for the kids. It helps transition toward the end of reading, or it helps to do that last blitz cleanup before your time is up and everything left on the floor gets carted off to Goodwill (um, not that I’d ever do anything so mean). So even though I initially thought of returning it, I can now heartily recommend it for parenting purposes.

Don’t get it to cook with though. It’ll make you very anxious about whatever you’re cooking. 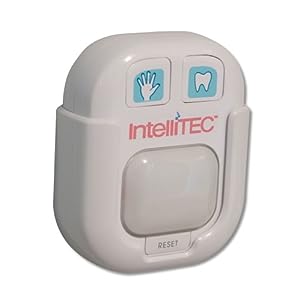 Full disclosure: we just got this two days ago, and I already have some vague problems with it, so take this with a grain of salt.

This is how tooth brushing used to go in our house: kid brushes for 12 seconds, asks, “Was that enough time?” we say no, kid brushes for 8 more seconds, asks, “Was that enough time?” and so on until we get sick of answering and say yes, that was enough time. Average brushing time: 43 seconds. Which includes the time when the toothbrush was not even in the mouth because the tooth brusher was asking if he or she had been brushing long enough.

Clearly we needed toothbrush timers! What I like about this one: it has a little holder so you can mount it on the wall, but your kid can also slip it out and walk around with it, which is handy if you have a bunch of peripatetic tooth brushers like we do. The big light flashes green for two minutes, and turns red when it’s done (there’s also a 20-second hand-washing timer). And, best of all, the kids think it’s fun.

What I don’t like: there’s no screw holding on the battery compartment door, so when the timer gets dropped, which it will, the door pops off and all the batteries fall out. And, also, a few times the “reset” button has gotten locked down, so it didn’t start blinking if you pressed the tooth-brush or hand-wash timer buttons. It’s easy to fix (just press the reset button again) but frustrating for the kids.

I’ll update you if these cons irritate me enough so that I don’t want to recommend this any more. But for now it has been really nice to have a few days of the kids brushing their teeth for long enough, and not asking every twelve seconds if they’re done yet.